Listen Bar founder Lorelei Bandrovschi attended Camper English of CocktailSafe's seminar at Tales of the Cocktail on Allergies and Cocktail Menu Labeling, but as it turns out, she already has the most advanced allergen labeled menu we've seen.

Listen Bar is an alcohol-free pop-up that looks about to complete fundraising to open a permanent location.

Below is the allergen labeling side of the cocktail menu. For the front of the menu, with drinks designed by some rockstar bartenders you probably already know, see this page. 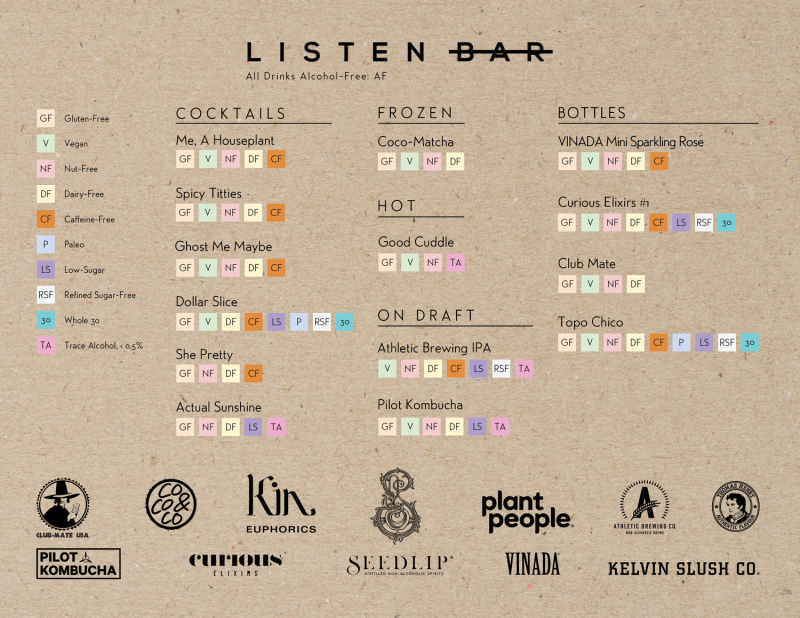 Due to a couple of seminars in Canada, we have researched some safety laws in the nation. As each province may have its own regulations, this turned out to be a challenge and we were only successful in some instances. On this page we list a few of the updates made to CocktailSafe pages.

CocktailSafe founder Camper English will be speaking at the Toronto Cocktail Conference this August.

Thujone limits in absinthe and other beverages.

Health Canada released a warning about gentian violet, but this is not related to the plant gentian.

Sulfites in Canada (according to Wikipedia)

Unlike in the United States, in Canada a type of black food coloring ("carbon black") is permitted.

It appears that for the same reason tobacco infusions aren't legal in the US (that all tobacco products must be sold with their original packaging) they would not be legal in Canada.

In Canada, "Oil, extract or root of calamus from Acorus calamus L." is forbidden in "all foods" as it is on the List of Contaminants and other Adulterating Substances in Foods.

It appears laws about bitter almonds may soon change in Canada.

Many resources for Canadian laws have been added to the Resources Page.